The 6-foot-2-inch senior is a three-sport athlete. Along with basketball, Anderson plays field hockey and participates in track and field. Anderson finished second in long jump in Delaware her sophomore year.

“She is consistently bringing something to the table with her competitive nature,” Perry said. “She is willing to do what ever it takes to be a winner.”

It is hard to miss the small/power forward on the court. Besides her height, Anderson is probably the player that is constantly attacking the rim and giving offensives a hard time.

“Her defense is relentless,” Perry said. “She loves blocking shots and always puts herself in a good position.”

In any down time, you can find Anderson asking Perry to open the gym so she can shoot around.

That same competitive nature translates to her studies. While most seniors try to have an easy last year of high school, Altia Anderson is taking three AP courses.  She is 16th in her class.

“She always wants to push to the next level in the classroom and on the court,” Perry said.

Anderson said her visit to Marquette felt like home.

“They made me want to work even harder,” Anderson said. “They are going to get a player that will do anything for the team. “ 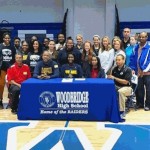 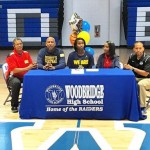