Blue Hens Have Another Chance To Get Back To .500

The late Yogi Berra once said, “It’s like déjà vu all over again.”  The Delaware Blue Hens can relate to that expression. For the second time this month, Delaware will play on the road following an emotional win at home. This time Towson is the opponent. Previously, it was a road trip on Oct. 10 that ended in disaster for the Blue Hens.

On that day, Delaware attempted to build off a last-second win over William & Mary.  The winless Rhode Island Rams appeared to be road kill on the Hens way back to .500 and flirtation with the FCS playoffs.  Instead Delaware lost 20-0. It was one of the worst defeats in head coach Dave Brock’s tenure in Newark.

Delaware took advantage of the bye following the Rhode Island game.  The extra week of rest and preparation paid off.  The Blue Hens scored 25 unanswered points at Delaware Stadium in a 31-14 victory over New Hampshire.

A new opportunity with a similar scenario is what awaits the Hens this Saturday.  Delaware’s strength, running the ball, will oppose the strength of the Tigers.  Towson has the 20th best rush defense in the nation.  However, the Tigers cannot game plan for just one player.  Thomas Jefferson continues to lead the Blue Hens in rushing.  For the season Jefferson has gained 612 yards on the ground and his three touchdowns last week against New Hampshire brought his team high total to six.  Joining the rush party is sophomore Kareem Williams.  In the New Hampshire game, the sophomore ran for a career high 140 yards.  His 5.4 yards per carry is nearly identical to Jefferson’s 5.6. 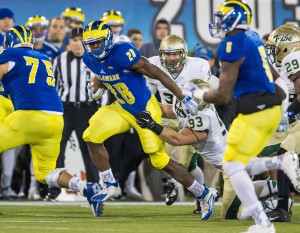 Delaware is led on the ground by Thomas Jefferson’s 612 yards (courtesy bluehens.com)

Quarterback Joe Walker has five interceptions this season, three occurred at Rhode Island.  He was not asked to throw often in the New Hampshire game, completing seven passes on just 11 attempts.  The big number that stands out for Walker last week is zero as in zero interceptions.

Towson needed two interception returns for scores in their most recent game to slide by Villanova 28-21.  The Tigers proved to be opportunistic with its defense meaning Walker needs to continue to protect the football.

In his first year (2012) Brock guided Delaware to a 7-5 record.  In 2013, the Hens finished 6-6.  A victory over the Tigers will help Brock reverse that trend and continue the hope for a wining season.