How Much Longer Will Kelly Remain With The Eagles?

Ten games into his third season as Eagles head coach, Chip Kelly is facing negative scrutiny he likely has not seen in his coaching career—certainly not at Oregon where he won nearly 90 percent of his games during a four year run with the Ducks.

His first season in Philadelphia produced an NFC East title. After the 12th game of the 2014 season, Kelly was the toast of the city. On Thanksgiving of that year, the Eagles went on the road and routed the Dallas Cowboys 33-10. That win pushed Philadelphia’s record to 9-3. With four games remaining, the Eagles were in control of the division with a one game lead and the season series lead over Dallas. The Eagles were flying high.

Since that game, Philadelphia has been in steep free fall. The Eagles lost three of those final four games. The 10-6 record matched Kelly’s first season, but the Birds failed to make the playoffs. Heading into this season, Kelly acquired general manager responsibilities and immediately began to flex his muscles. Last year’s leading receiver Jeremy Maclin – gone. Kelly thought that 1,318 receiving yards and 10 touchdowns was not worth resigning. Last season’s leading rusher LeSean McCoy – gone. Kelly traded away a player who ran for the third most yards, 1319, in the NFL.

The replacements have failed to fill the void of the departed play makers. It begs the question, did Chip Kelly the general manager derail Chip Kelly the head coach? Since posting that 9-3 record at Thanksgiving 2014, Kelly has lost nine of his last 14 games. His fast offense is not generating points. The Eagles, with Kelly’s players, are 15th in the NFL in scoring averaging 22.9 points a game. Prior to assuming player personnel power, Philadelphia was a top five offense. The Eagles averaged 29.6 points last season, third best in the NFL. In Kelly’s first season they scored the fourth most points in the league, averaging 27.6 a game. 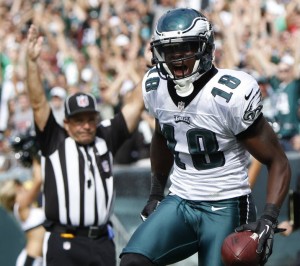 With Jeremy Maclin, the Eagles averaged nearly seven more points per game in 2014 than this season. (courtesy eagledelphia.com)

During the winter of 2013, Kelly was the shiny new object that several NFL teams looking for a new coach coveted. He spent an entire day with the brain trust of the Cleveland Browns who were desperate to change a losing culture. On Jan. 4, NFL.com reported that Kelly was close to signing with Cleveland. A deal was never finalized. The Eagles and Buffalo Bills made pitches to the successful college coach. Kelly even hinted about returning to Oregon. The stability of the ownership and the talent of players on the 2013 roster made the Philadelphia job more appealing than Cleveland or Buffalo.

With an emphasis on running more plays than the opposition, Kelly was suppose to bring a new approach to NFL offenses. After failing to make the playoffs in Andy Reid‘s last two seasons, this was supposed to elevate the franchise. It was suppose to take it to a level Reid had been unable attain since 2008, Super Bowl contention.

The honeymoon with Kelly is officially over. The Eagles are in jeopardy of missing the playoffs for a second straight season. For the second season in a row the Eagles will play on Thanksgiving. In 2014, it was the high point of the year. This season, it is just another game in a what thus far has been a failed campaign and putting into doubt where Kelly will be employed on Thanksgiving 2016.