LEWES, DE – We are starting a new WBOC web series called “Interview of the Week.” Each week I will interview a local sports figure on Delmarva. Today, we go to Lewes to find out a little more about Cape Henlopen field hockey head coach Kate Austin.

The 27-year-old has been the head coach of the Vikings since 2012. Under her guidance, the Cape Henlopen field hockey program has won three straight state championships (four in a row total). As the head coach at Cape, Kate has suffered only one loss.

This season the Vikings are currently undefeated and look poised to make another run at the state championship.

1. Were you born and raised on Delmarva? Where did you go to college? Did you play any sports in college? What was that experience like?

I was born and raised in Delaware and attended Caesar Rodney High School, graduating in 2006.  From there, I continued my field hockey career at the University of Richmond for one season and then transferred to the University of Delaware for the remainder. I played field hockey for one season at UD before having multiple hip surgeries that ended my career.  Playing college hockey was a very tough experience for me.  I was recruited as a freshman in high school and had everything planned out, and then got hurt at the start of my freshman year and missed almost every game.  When I transferred I never fully recovered and it was difficult going from being a standout in high school, with a coach that really cared about me (her Mom) to being pushed aside because I couldn’t help the team anymore.  I try to keep my experiences from my players because I don’t want what I went through to have any influence on their decision to play in college, because I know it is a different experience for everyone.

2. How did you get involved with coaching and why do you love it?

My mom ran clinics for elementary students at C-R, and as soon as I was in 6th grade I could start coaching the younger girls.  From there, I started coaching travel teams, and after I was done playing in college, had the opportunity to coach with Robin Adair at Tower Hill.  I love coaching; I love to win and like being challenged.  It’s like figuring out a puzzle each year with who to put on the field and what changes to make throughout games and seasons. It’s exciting to see the hard work of 25 girls pay off at the end of November.

3. Under your guidance, the Cape Henlopen field hockey program continues to be a powerhouse. How do you keep up the dominance year after year?

I have extremely high expectations and my girls know to expect that from the start.  My coaching staff is demanding at practice and we try to bring the best out of each player everyday.  I also don’t really see it as dominance.  We go into each game like we are playing the best teams, and most of the time, with our conference, we are.  We are lucky to have options for the off season and almost all of our players are busy out of season getting in shape and improving their skills and knowledge of the game. 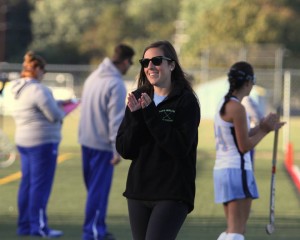 4. What are your short and long term goals as the field hockey coach at Cape Henlopen?

Short term, I want my team to get better each day.  We preach at practice to avoid setbacks and make each rep your best.  Obviously we start each season with a goal of winning a state championship and that will always be a goal of mine for as long as I coach.  I want to send players to college teams and be able to see them dominate at the next level and the come back at some point and be a part of the program and continue the winning tradition.

5. Can you touch on the feeder program you have for field hockey at Cape Henlopen? I know a lot of these girls have sticks in their hands at very young age, which ultimately helps the varsity team down the road.

At Cape we are very fortunate to have two amazing middle school teams, Beacon and Mariner, with coaches who know the game and are invested in making those girls better hockey players.  We also have a number of club teams in the area for our girls to join.  We’ve recently started a camp in the summer for girls in grades 1-8 and have seen great numbers with girls who can’t wait to get to 9th grade and put on that Cape uniform.

6. Every year the Cape Henlopen field hockey team is the hunted. Everybody wants to beat you. How does your program embrace that challenge every game?

It’s tough to be the team everyone is out to get.  A lot of pressure comes with being on top at the end of each season and the more we win, the more the rest of the state wants to take us down.  The girls at Cape are just driven to be the best.  At practice we really strive to focus on the fundamentals and consistency, because that’s what makes a team successful.  I think there’s also that fear of being the first team to break the winning streak motivating them each day. 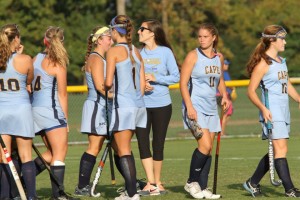 7. High school field hockey in the Henlopen Conference is terrific. Cape, Delmar, Polytech, Sussex Tech, all very good programs. What does that say about the quality of field hockey that is played in this area compared to other parts of the country?

Every year I think the Henlopen Conference is the strongest in the state. I think field hockey is starting to catch on a lot more across the country.  Fortunately, we’re in an area where hockey has been strong for a while and getting stronger.  We’re still a little behind some of the teams in Pennsylvania and New Jersey that rank at the top in the country, but Delaware is starting to catch up and I think that’s getting the attention of more college coaches.

8. What advice would you give to high school student-athletes hoping to play any sport at the collegiate level?

I believe there is a school for anyone with the desire to play in college.  College sports are definitely demanding, but rewarding at the same time. I would highly recommend starting the recruiting process early by contacting coaches and visiting schools.  It’s important to do your homework before making a decision. Dollar signs can be a motivator for a lot of student athletes, but in the end you have to choose a school for the school and not for the sport.  College coaches often leave for new opportunities and in my situation, an injury can end your career, but you still have to be happy at the school you choose.  If someone wants to play in college but not devote a majority of their time to it, there are club and intramural options at most schools. 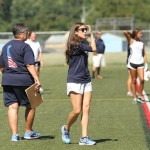 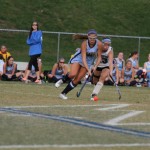