THURMONT, Md.- A Little League team from Thurmont, Maryland is a step closer to the Little League World Series after a 5-2 come-from-behind victory over Delaware’s state champions Thursday night.

Delaware started off the game with a 1-0 lead in the first inning. Its starting pitcher Kyle Wells gave up three hits, one run and a walk in the first four innings, while Maryland’s starter E.J. Lowry allowed two runs on two hits with six strikeouts and four walks in 4.2 winnings.

But in the fifth inning, Maryland scored two home runs, putting the team ahead of Delaware, which was unable to recover.

Thurmont will play Pennsylvania at 7 p.m. on Friday, with the winner moving on to the Mid-Atlantic Regional championship game against New Jersey. 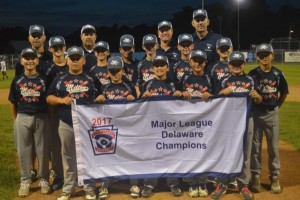