BALTIMORE (AP) – Seven weeks into their horribly disappointing seasons, the San Diego Chargers and Baltimore Ravens meet in a game that is significant to both for all the wrong reasons.

When the NFL schedule was posted, the Chargers and Ravens figured this November matchup would go a long way toward deciding seeding for the postseason.

Instead, San Diego (2-5) and Baltimore (1-6) will be vying to end three-game losing streaks Sunday and distance themselves from discussion about qualifying for the No. 1 pick in the 2016 draft.

“Both football teams, obviously, you thought your record was going to be different,” San Diego coach Mike McCoy said. “But you know what? You’ve got to put the past behind you. I’m sure that’s exactly what they’re talking about there, too.”

The Ravens certainly aren’t chatty about getting off to the worst start in the 20-year history of the franchise.

Tied with Detroit for the worst record in the NFL, the Ravens have lost all six games by eight points or fewer.

San Diego dropped its past three by four, seven and eight points.

“It’s not like it’s been blowout games,” said kick returner Jacoby Jones, who left Baltimore for San Diego during the offseason. “You’ve got to finish the game.”

Some things to know about the Chargers-Ravens matchup:

That includes a 503-yard performance against Green Bay and 336 yards and three touchdowns in a loss to Oakland last weekend.

Rivers leads the NFL in attempts, completions and yards passing. He brings the league’s No. 1 offense against a pass defense that ranks 28th.

“He has always been a real challenge for us, like he is for everybody,” Ravens coach John Harbaugh said. “They have big receivers that he goes to. They have a big, physical offensive line. They have a good stable of guys that they’re working with, it revolves around Philip Rivers.” 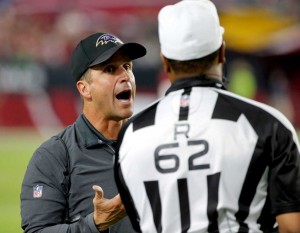 JACOBY RETURNS: Jones made a name for himself with the Ravens during the 2012 postseason, scoring on a 70-yard pass in the waning minutes of regulation against Denver and taking back a kickoff 108 yards in the Super Bowl.

He had three wonderful seasons with Baltimore before the team opted not to re-sign him during the past offseason.

The separation has not worked out well for either party.

Baltimore is thin at wide receiver and has struggled in the return game. Jones, meanwhile, has been a non-factor with San Diego: He hasn’t caught a pass, has four punt returns for minus-2 yards and has not taken back a kickoff more than 30 yards.

TURNOVERS NEEDED: The Ravens have gone four straight games without recording a takeaway and own a minus-7 turnover differential for the season.

Baltimore has already forked over the ball 11 times, including eight interceptions by Flacco. During the Ravens’ 2012 Super Bowl run, they committed 16 turnovers over the entire season.

Since 2000, Baltimore is 67-3 when garnering a plus-2 turnover ratio in a game. One of those three defeats came against the Chargers last season.

HOME RUN: After playing five of their first seven games on the road, the Ravens begin a stretch of three straight games at home sandwiched around a bye.

“It doesn’t matter where this next game is going to be. It could be in Australia,” Webb said. “We need all of them.”

The Ravens thrive on the support of their fans, but they might hear boos Sunday if things aren’t going well.

“I would definitely be surprised,” Flacco said. “But at the end of the day, these people and this city are entitled good football. And when you’re not getting it, you can understand.”

Verrett, one year removed from being San Diego’s top draft pick, will be going up against a wily 15-year veteran who leads Baltimore in catches and yards receiving.

“He’s a really good athlete,” Harbaugh said of the 5-foot-10, 188-pound Verrett. “He has really good feet, body control, ball skills. That’s what makes a good corner. He’s a competitor, so it’ll be a heck of a matchup to watch.”