One Run Short Of A Title

Milford, DE – In their previous six games, the Sussex Tech Softball Team did not allow their opponents to score more than two runs.  That was also the case in Saturday’s State Championship Game against Caravel Academy.  Sussex Tech gave up two runs.  Unfortunately for the Ravens, they only scored one.  Caravel takes the 2016 title with a 2-1 victory.

Tech had a great opportunity to strike early when they loaded the bases with nobody out in the first inning.  However, Caravel pitcher Holly Brooks retired the next three Ravens, preventing any on base to score.

Caravel took advantage in their half of the first.  Brooks drove in Samantha Esper with an opposite field hit to right.  Three batters later, Jennifer Sieminski brought home Kayla Sobolak for a 2-0 Buccaneer lead. 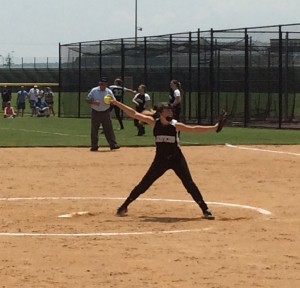 After giving up two runs in the first inning, Taylor Wroten shutout Caravel for the remainder of the Championship Game.

Tech shutout Caravel the rest of the game and got to within a run in the fifth.  Rylee Shockley delivered a two out shot that went off the glove of Caravel thirdbase Chloe Kennedy.  The ball caromed down the leftfield line allowing Taylor Collins to score and narrow the Bucs lead at 2-1.

The Ravens could not generate a threat in the sixth and seventh innings.