DELMAR, Del. – By 4:30 p.m. Wednesday, June 29, the parking lots at the U.S. 13 Dragway were nearly filled for an event with a start time that was still nearly four hours away. A big reason why all those people showed up early was that two of the stars of the Discovery Channel show Street Outlaws, Daddy Dave and BoostedGT, were at the race complex to interact with their fans and a make a few passes.

They are two of twenty drivers that are part of the underground street racing community in Oklahoma City. Delmar is one stop of a current tour of the eastern part of the United States.

Competing against each other and local drivers is part of the event. However for Dave, it is also an opportunity to say thank you to those loyal viewers of the show. 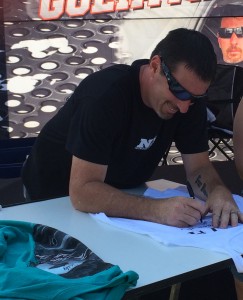 Daddy Dave autographs a shirt for a fan hours before his event at the U.S. 13 Dragway.