The East Region itself consists of 24 schools from the Bayside and Upper Chespeake Conferences.

The top eight to 10 wrestlers at each weight class advance to this second post season tournament through either seed points or placing in their own district tournament.

These young athletes are competing to place in the top 4 of their weight class in this tournament in order to earn a ticket to the Maryland State Tournament.

Out of the 56 total spots available that would advance a wrestler to states the Bayside Conference wrestlers took 30 of them.

There were Bayside wrestler crowned champion in 12 out of 14 weight classes. If you would like to see the State Brackets please click here.

Listed Below are the individual placings for each weight class: 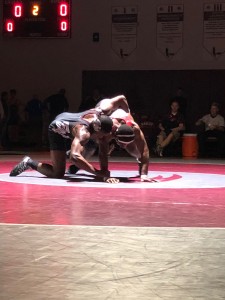 Coach Tim Frey and North Caroline wrestlers were able to pull out another tournament team score win with 178.5 points. Behind them were Patterson Mill with 104 points, Kent Island in third with 100.5 points, and the hosting school Snow Hill in fourth with 99 points. Click for full list.

If you would like to come support these Bayside athletes at the state championship, it will take place this coming weekend, March 2-3, 2018, at the Showplace Arena in Upper Marlboro, Md.

Below are two links to two videos: one is from the Bayside Conference Tournament in Cambridge and the other is from the Regional Tournament in Snow Hill. If any of your wrestlers would like their footage please feel free to contact beau.harrison1388@gmail.com