The team duel that ended 39-31 in favor of the Bulldogs kept the tensions in this packed gymnasium high. Each match just as intense as the next.

The night started out at the 120-pound weight class, where Decatur’s Jagger Clapsadle pulled out the major decision 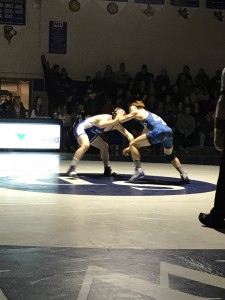 over Reilly McIntyre of North Caroline. The next two weight classes went in North Caroline’s favor, bringing the team score to 9-4.

Possibly the closest match of the night came at the 138-pound weight class between Jeremy Danner from Stephen Decatur and Seth Layton for the Bulldogs. In a heated bout, that lasted the full six minutes, Layton pulled out the win in the third period ending the match in a 4-3 minor decision.

A pin from North Caroline’s Hilliard, at 145 pounds, brought the Bulldogs ahead to 18-4.

At 160 pounds, Tyler Riley from North Caroline earned the pin fall over Decatur’s Brady, and in the process earned his 100th career win as well! For those of you who are not delved into the wrestling world, the 100-win mark is one of the largest milestones a high school wrestler can reach in his or her career. 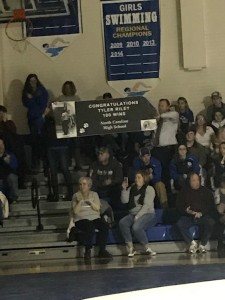 North Caroline continued to win two more matches, leading into the 195-pound weight class with the score board showing 39-4 in their favor. Stephen Decatur’s Lukas Layton gets the 6-5 minor decision over Caroline’s Grable at 195 pounds, leading the Seahawks to pin their way through the final four weight classes, but it was not enough to prevail over this tough Bulldog team.

Head Coach Tim Frey earned his 400th career win with the Bulldogs on Wednesday night. Another huge accomplishment for this team.

From here both teams will continue to prepare for both the team state tournaments, taking place next week, as well as their individual conference, regional, and state tournaments spanning over the next three weekends.