Berkman is the NCAA’s all-time leader in national championship victories with 11 and career wins with 500 for all NCAA lacrosse coaches all time; including men’s and women’s NCAA Divisions I through III. Berkman’s 500 wins consists of 491 during his tenure at the helm of SU, with the other nine coming after a 9-6 season as the head coach at the State University of New York–Potsdam.

SU officials point out that in his 29 seasons at Salisbury and one at Potsdam, Berkman’s 500 wins are not just a milestone of longevity: he’s also the all-time leader in winning percentage in college lacrosse with an .899 percent mark following Wednesday‘s win. Berkman has lost just 56 games in his 30-year career as a head coach.

Despite his remarkable achievements, Berkman takes a humble approach to it all.

“It’s a credit to all of the guys that have created this special lacrosse legacy at Salisbury University,” he said. “Hopefully it’s another step towards continued greatness for the program and all of the players that have been here.”

Even after three decades as a head coach, it never gets old for Berkman. He still has the same enthusiasm that he had years ago.

“It’s been a great run.  I love doing it every day,” he said. “I am excited as heck to go out to practice today and see how much better we are going to get.  I really love this team.” 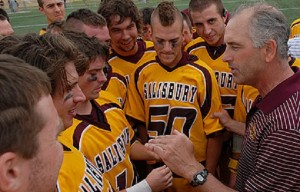 Highlights of Wednesday’s Victory Over Wesley

The Gulls (11-0, 4-0 CAC) stormed out to an early lead over the Wolverines (4-8, 0-4 CAC) to secure Berkman’s 500th win early on. Three minutes into the contest Nathan Blondino and Carson Kalama each had a helper and goal with Kalama striking first off a dish from Kalama, before Kalama buried one from Blondino.

At the end of the first quarter, Salisbury led 7-2 with Nick Garbarino having one goal and four assSaists. The four assists in the first quarter matched his season total from 2015-16 and doubled his 2016-17 assist total.

The second quarter saw the Gulls continue to overpower the home team with the two sides heading into the locker room with Salisbury up, 16-3.

At the half, Salisbury had three players with at least six points in starting attackmen Blondino (three goals and five assists), Kalama (four goals and three assists), and Garbarino (two goals and four assists); while Josh Melton pumped in four points off two goals and two assists in the opening 30 minutes. Duncan Campbell and Andrew Ternahan also had standout halves with seven and five groundballs, respectively. T.J. Logue also scooped up four groundballs in the first half.

The starting attack continued its offensive outburst this season with all three starters getting or tying career highs for points. The unit combined for 13 goals and 15 assists for 28 points. Blondino had five goals and seven assists for 12 points breaking his past high of nine points, Kalama boasted nine points from six goals and three assists to better his previous high of seven points, and Garbarino finished with two goals and five assists to tie his career high of seven points. 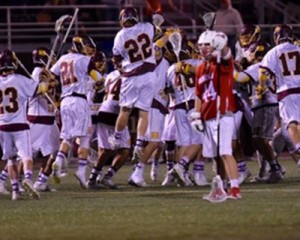 Salisbury outscored the Wolverines 6-0 in the third quarter to increase its lead to 19. Will Nowesnick got the second goal of the quarter for his first-career tally. In all Salisbury held a 10-1 advantage in the second half after a 4-1 edge in the fourth quarter.

Campbell won 13-of-15 faceoffs in the win while Logue went 14-for-15. Campbell ended with 11 groundballs and Logue scooped up 10 of his own as the two combined for a 90 percent success rate from the X.

Salisbury returns to play on Saturday, April 1 on the road at St. Mary’s College of Maryland for a 1 p.m., CAC contest.