GLENDALE, Ariz. (AP) – Baltimore blocked a punt to set up a late touchdown and quickly moved down the field to set up a potential tying score.

Like so times this season, the Ravens came up just short, extending their season-long misery in close games

Joe Flacco floated a pass into the end zone that was picked off by Tony Jefferson with 6 seconds left, ending Baltimore’s comeback bid in a 26-18 loss to the Arizona Cardinals on Monday night.

Picked as potential Super Bowl contenders, the Ravens (1-6) have struggled to close out games all season. Before Monday, Baltimore had blown fourth-quarter leads three times and twice staged comebacks that fell short, leading to the worst start in franchise history.

Count this one as another comeback failure.

Trailing 26-10 in the fourth quarter, Baltimore showed a bit of life when Asa Jackson blocked a punt and Flacco found Kyle Juszczyk with a 1-yard touchdown pass the next play. The Ravens scored a 2-point conversion despite an illegal formation penalty and got the ball back at their own 24 with 1:53 left.

Despite communication problems with the sideline, Flacco worked quickly and efficiently to get the Ravens down to Arizona’s 4 with 18 seconds left. Facing pressure, Flacco tried to lob a pass to 6-foot-6 tight end Crockett Gilmore, but sent it a little too long and the 5-foot-11 Jefferson came down with it in the back of the end zone.

“It was a big-little match up and I thought he might go on top of the guy,” said Flacco, who threw for 252 yards and a touchdown on 26-of-40 passing. “It just worked a little bit different.”

But the Ravens gathered themselves – for a little while.

Baltimore’s defense started to slow the Cardinals (5-2) a little and the offense was solid early, driving for Justin Tucker’s 44-yard field goal in the first quarter and Justin Forsett’s 14-yard touchdown run in the second. 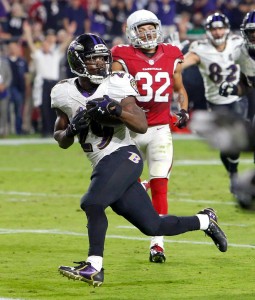 Ravens running back Justin Forsett rushed for his second touchdown of the season against the Cardinals (AP/Photo Ross D. Franklin)

But, as has been the case most of this lost season, mistakes began to burn Baltimore.

Punt returner Jeremy Ross lost a fumble at Baltimore’s 25 and Jackson was hit with an unnecessary roughness penalty after the Cardinals recovered. Arizona started at the 10, then Lardarius Webb and Brynden Trawick each had pass-interference penalties to give the Cardinals extra shots at the end zone. They took advantage, scoring on Carson Palmer’s 3-yard pass to Michael Floyd to go up 14-10 at halftime.

Another gaffe came late in the third quarter.

Taking a handoff left, Johnson ran toward Arizona’s sideline and appeared to be stopped, ending up on his back. Though everyone else stopped, Johnson realized Baltimore defensive tackle Brandon Williams was between him and the ground, so got up and stated running again. He ended up at the 8 after the 62-yard run, leaving the Ravens stunned and Harbaugh incensed.

“I thought he was on the ground,” Williams said. “Usually when I tackle somebody, they are down.”

Matt Catanzaro kicked his second field goal, from 21 yards, to cap the drive and Palmer hit John Brown on a 4-yard touchdown pass to put the Cardinals up 26-10 early in the fourth quarter.

The Ravens managed to mount another comeback, but this one came up short, too.

“Regardless of the record, we’re going to fight every day,” Trawick said. “It just didn’t go our way today.”

Notes: Ravens WR Steve Smith passed Henry Ellard for 11th on the NFL’s all-time receiving list with 13,350 after catching nine passes for 78 yards. … Palmer moved past Donovan McNabb (37,276) into 20th on NFL’s all-time passing yards list. He has 37,377 yards after throwing for 275 and a pair of touchdowns on 20-of-29 passing. … Cardinals starting CB Jerraud Powers did not play in the second half after suffering a hamstring injury. … Baltimore had 55 yards rushing on 16 attempts.