Delaware Stadium has served its tenant well in 2015. The Blue Hens have played four games in Newark.  Three times they have celebrated a victory. The Hens have defeated a ranked team (William & Mary), a long time CAA nemesis (New Hampshire), and an old-school rival (Lafayette). Good thing for Delaware they like playing at home, because their uninspiring performance on the road has put a winning season in jeopardy.

If only it was that easy.   The Blue Hens own the second worst passing offense in the nation. If you are scoring just for the CAA, Delaware’s air attack is last in the conference.   Redshirt freshman Joe Walker has started at quarterback the last seven games. Head coach Dave Brock hinted this week against the Great Danes that Blake Rankin could see his most significant action since starting the season opener against Jacksonville. 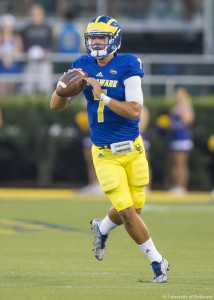 Blake Rankin has not played in six of the last seven games (courtesy bluehens.com)

Walker has not progressed enough to allow Delaware to deviate from its run heavy offensive strategy.   If your quarterback is only completing 42.5 percent of his passes and has thrown six interceptions to just one touchdown, you might have a problem.

Brock has seen what Walker can do. With Rankin, not so much in games, however Rankin was on the Rutgers roster in 2012 when Brock served as Scarlet Knights offensive coordinator. Rankin transferred to Delaware prior to the 2014 season. Brock has over 2 years of Rankin practice, one 2015 start, and some snaps at Villanova this season as a gage. Neither quarterback was able to separate from each other during training camp. Walker’s dual threat capability (his 336 yards rushing is third on the team) has been enough of an edge to keep him in the lineup.

Albany’s pass defense is ranked 85th in the nation. It should be an area a balanced offense would be eager to exploit. By only averaging 67 passing yards per game, the words balanced offense and Blue Hens are nowhere near being aligned.   The last Delaware losing season was K.C. Keeler’s last as head coach. The injury plagued squad of 2012 lost their final four games to finish at 5-6.   A stalled passing performance over the final three games of 2015 puts a similar record into play for Delaware.