LEWES, DE – It was an exciting Friday morning at Cape Henlopen High School.

Carey Karl is heading down south to play field hockey at Queens University in Charlotte.

Winners of four straight state championships, Karl is hoping to guide the Vikings field hockey team to another state title next week. Cape Henlopen hosts Mount Pleasant on Saturday in the quarterfinals of the State Tournament. The game is scheduled to start at 2:00 p.m. in Lewes. 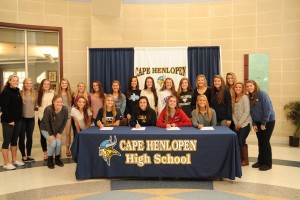