Delaware’s High School Girls Soccer Player of the Year has one more game in her Indian River career.  Brooke Beam scored what would be the eventual game winning goal in a 2-1 win over Delaware Military Academy Wednesday in the semifinal round at Smyrna.

Friday, the Indians head back to Smyrna for a date with Caravel for the Division II state championship.  It provides Indian River with the opportunity for payback.  Caravel took the 2015 title with a 3-1 win over the Indians.  Beam scored the lone goal for Indian River. 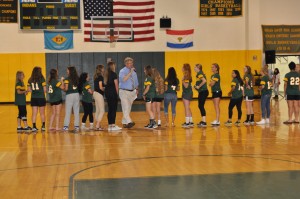 The Division I Championship will be decided in the second match of the night at Smyrna.  Caesar Rodney also looking for some payback.  The Riders face Padua, the only school to defeat Caesar Rodney this season.  The Riders advanced to the finals with a 2-1 win over Middletown.