Delaware State is on its toward making the type of history that no college football program likes to promote. The Hornets are 0-8 in 2015.   Three games are all that remain this season. Three opportunities to snap a 13-game losing streak that was a carry over from last season. That skid was a factor in the decision by the university not to renew Kermit Blount’s contract after four years as head coach.

The change of head coach to Kenny Carter, with an assistant coach pedigree at BCS schools, has not made a difference. The Hornets face the realistic prospect of going winless for this season. Sadly for Delaware State, it won’t be the first time. The Hornets have three games to avoid joining John McKenzie’s 1998 squad in the dubious O For The Season club. In addition to that team, Delaware State posted a 0-1 record in 1938, 0-2 in 1939, and 0-3 in 1941.

By all measures, it is bad for the Hornets. The two most glaring discrepancies on offense are the average margin of defeat, 26.1 points and the opposition average of 156.4 more rushing yards per game.

The numbers are not much better on the other side of the ball. Hornets’ quarterbacks get sacked with regularity, 34 times for the season.   Conversely, Delaware State has only gotten to opposing quarterbacks 12 times.

For a better 2016, Carter needs to rely on experience. Only one starter on the offensive line, Dimitri Hill, completes his eligibility this season. Freshman running back Brycen Alleyne scored two touchdowns last week against Bethune-Cookman in his most productive action of the season. Both quarterbacks, Gil Rivera and Kobie Lain, on the depth chart have one and three seasons respectively of eligibility. On defense, eight starters could return. 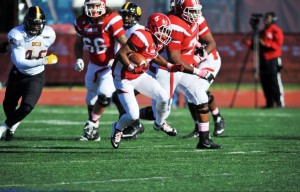 Carter just did not have pit stops at BCS schools; he made an impact. In his second season as wide receiver coach at Penn State, Carter contributed to turning the 2002 Nittany Lions into an explosive offense. Penn State had the second best offense in the Big Ten that season compared to being the second worst the preceding year. Prior to coaching the running backs at Louisville, the Cardinals had the worst offense during the 2009 Big East season. They jumped to third in 2010 and were second in 2012.

Will Delaware State have the patience to ride out one of the worst seasons in school history?   McKenzie only lasted one additional season after his winless campaign. Three other coaches have followed with only Al Lavin able to generate any consistent success. Going winless for an entire season is not how any coach would like to begin his tenure. The first of three chances to avert history takes this Saturday at North Carolina Central.