Despite 26 Points From Okafor, 76ers Lose Season Opener To Celtics

BOSTON (AP) – Isaiah Thomas had 27 points and seven assists, and the Boston Celtics beat the Philadelphia 76ers 112-95 on Wednesday night in the season opener for each team.

Jahlil Okafor, the third overall pick in this year’s draft, led the 76ers with 26 points. Nerlens Noel had 14 points and 12 rebounds, and Isaiah Canaan scored 18 points.

The Celtics grabbed control in the final period, opening an 86-71 lead on Jonas Jerebko’ transition 3-pointer from the left corner.

Philadelphia trailed by 11 at the break, but closed to 72-67 on Hollis Thompson’s 3-pointer from the left corner. Boston then scored the final seven points of the third. Thomas, who had 13 in the quarter, nailed a 3 from the right wing in the final seconds. 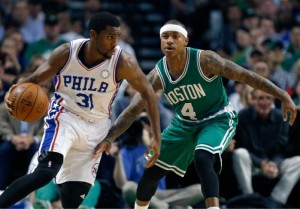 Hollis Thompson got the 76ers back into the game during the third quarter. (courtesy AP/Photo Micheal Dwyer)

Coming off a 40-42 record and a seventh-place finish in the Eastern Conference in coach Brad Stevens’ second season, the Celtics entered their 70th year in the NBA loaded with a roster full of what could be described as complimentary players who could fill different roles.

Philadelphia, meanwhile, is young again. Twelve of the 15 players on the 76ers’ opening roster had two years or less of NBA experience. They went 18-64 last season, and then drafted Okafor out of Duke.

76ers: Coach Brett Brown talked about how his team was dealing with injuries for the opener. “Going into tonight’s game with nine and a half players,” he said. “It’s just part of the situation we’ve been dealt with.” . G Tony Wroten (knee) and Kendall Marshall (knee) are both still sidelined after they each tore an ACL in January. C Joel Embiid will miss the season after the second surgery on his right foot.

76ers: Host Utah in their home opener on Friday.