SALISBURY, Md. – The Delmarva Shorebirds, in conjunction with the Baltimore Orioles, announced Monday that right-handed pitcher Matthias Dietz has been named the organization’s Minor League Pitcher of the Month for May.

Dietz, a 22-year-old from Orland Park, Ill., found a new level during his second month of the season, going 3-0 with a 1.17 ERA over four starts. In 23 innings, he held opponents to a .185 batting average, striking out 24 against just seven walks.

After enduring a no-decision on May 3 against Greenville, Dietz won his May 10 start at Lexington, allowing one run over five innings and striking out a career-high-tying eight. In his next outing against Hagerstown 10 days later, he was nearly untouchable, notching six scoreless innings to anchor the Shorebirds’ 4-0 shutout win over the Suns. 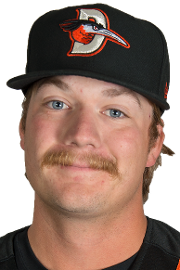 Dietz cranked things up a few notches against Lakewood on May 25. He shut out the BlueClaws over a career-high seven innings, scattering three singles with no walks and striking out seven on just 74 pitches in a game the Shorebirds would win 3-0. Dietz faced just one batter over the minimum, never issued a three-ball count, and at one point retired 15 Lakewood hitters in a row, extending his month-ending scoreless streak to 17 innings.

Through the first nine starts of his second season in Delmarva, Dietz is 5-1 with a 2.91 ERA and a team-high 52 strikeouts over 46.1 innings. His five wins are the most on the Shorebirds’ active roster and are already two more than his win total from 2017. Dietz stretched his scoreless streak to 19.2 innings before surrendering a run in the third inning of his June 1 start at Charleston.

The Orioles drafted Dietz in the second round of the 2016 MLB First-Year Player Draft out of John A. Logan College in Carterville, Ill. His signing scout was Dan Durst. Dietz becomes the third Shorebird to win an Orioles monthly award this season after Zach Jarrett and Zac Lowther took home Player and Pitcher of the Month, respectively, in April.

Dietz is due to make his next start in the Shorebirds’ Thursday night game against Greensboro at Perdue Stadium.