Eagles Fall Out of First Place After Loss at Carolina

CHARLOTTE, N.C. (AP)- The Carolina Panthers are 6-0 for the first time in franchise history.

You wouldn’t know it if you walked through the locker room.

The Panthers are playing it cool following their fast start – and their 27-16 win over the Philadelphia Eagles on Sunday night.

“We’ve been doing a pretty good job of maintaining our focus and understanding what we’ve accomplished so far,” quarterback Cam Newton said. “We’re not satisfied with what we’ve done. Is it good? Yes, but at the same time we’re still trying to conquer things that people said we couldn’t do, and surprising ourselves at the same time.”

Carolina hosts the struggling Indianapolis Colts next Monday night before an intriguing battle with the also unbeaten Green Bay Packers the following week.

“When you’re 6-0 in the NFL, that’s pretty good,” tight end Greg Olsen said. “It’s a big deal to be 6-0, but obviously we’re trying to get to 1-0 each week. Like we said last week, five wins isn’t going to do anything; six wins isn’t going to accomplish anything. We still have a lot of work to do.”

MATHEWS CARRIES: Philadelphia’s Ryan Mathews provided a spark by ripping through the middle of Carolina’s defense for a 63-yard touchdown midway through the third quarter. But the Eagles only gave him one carry the rest of the way. “We had him in there,” coach Chip Kelly said of Mathews. “He was playing in the third and fourth quarter. There were just pass plays called when he was in there.” 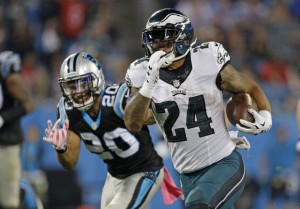 The Eagles’ Ryan Matthews ripped off a 63 yard touchdown in the third quarter at Carolina. (AP Photo/Bob Leverone)

“There’s only one ball,” Mathews said. “We’ve got three good running backs. We’ve got to make the most of each opportunity we get, and I think that’s what we did.”

INCONSISTENT EAGLES: Sam Bradford isn’t having the type of season he wanted so far with the Eagles.

Through seven games, Bradford has 10 interceptions and nine touchdowns, a representation of the team’s up and down play.

“Inconsistency is probably the word that comes to mind,” Bradford said. “I think we have shown flashes in about every game on doing things well and moving the ball, running the offense the way that we want to, but then. whether it be a various assortment of self-inflicted wounds, we just kill ourselves. And it happens too often.”