In between, Sam Bradford threw a winning 41-yard touchdown pass to Jordan Matthews in overtime. So the normally stoic Murray had to admit it was a special night.

Murray put the Eagles in position with a 20-yard run on the first possession of the extra period, and Matthews’ score sent the Cowboys to their longest losing streak in 26 years with a 33-27 Philadelphia victory Sunday night.

“It was electrifying,” said Murray, who broke Emmitt Smith’s Dallas franchise record with an NFL-best 1,845 yards rushing last season and is starting to churn out yardage after a slow start this year. “They’re like family to me. I wish those guys nothing but the best.

“This one’s special. A lot of emotion.”

Jordan Hicks had a 67-yard interception return for a touchdown for the Eagles (4-4).

Murray had his most productive game in Philadelphia, finishing 161 total yards – 83 rushing with a 1-yard score and 78 receiving. He had a 44-yard catch on a 95-yard drive for the Eagles’ first lead at 14-7 on their opening possession of the second half.

“I’m sure he had a little more fire in his belly tonight, but we knew this was a big game for us,” Bradford said. “Coming off the bye week, a divisional game on the road, we needed this one.”

Matthews, who had nine catches for 133 yards, broke away from rookie defensive back Byron Jones and ran past safety J.J. Wilcox on the first possession of overtime. 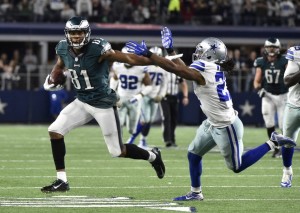 Eagles wide receiver Jordan Matthews on his way to the endzone for the winning score. (courtesy AP/Photo Michael Ainsworth)

Dallas (2-6) lost its sixth straight – all without quarterback Tony Romo – despite Dez Bryant’s first touchdown catch of the season in his second game after missing five with a broken right foot. The Cowboys dropped their first eight in 1989, when they finished 1-15 the year Jones bought the team.

“We can add and subtract,” Jones said. “We all know the job we have ahead of us.”

Things to consider after just the second overtime game in 114 meetings between these division rivals:

THE OT: It was the second time during the skid that Dallas lost by giving up a touchdown to start overtime. New Orleans’ Drew Brees threw an 80-yard touchdown pass on the second play of the extra period in Week 4.

This time, Murray had a 20-yard run to get the drive going. Bradford’s winning toss on his 28th birthday came a play after officials originally ruled a fumble at the end of a run by Ryan Mathews. But replays showed his knee was down before the ball came out.

“Jordan did a great job running that route,” said Bradford, who threw for 295 yards. “It was something that we worked on all week. Best birthday present ever.”