Game of the Week: Elkton vs. North Caroline

RIDGELY, Md. – The North Caroline Bulldogs football program did something  that has never been done in school history. They won their first playoff game.

The Bulldogs’ 21-14 win over Queen Anne’s in the first round of the Maryland 3A East Regionals secured their sport in school history. Now that their mark will forever be left, the want to take their momentum all the way to the state title game.

One small feat stands in their way, the Elkton Golden Elks. Physically speaking the Golden Elks are actually quite big. Physique, however, cannot scare a Bulldog.

“We set goals at the beginning of every season and we wanted to be the difference makers,” North Caroline Quarterback Cameron Byrd said. “This season is not just for the team but the school and every body in it.”

The undefeated Bulldogs seniors have climbed their way up for four years for a post-season showdown.

“It means a lot because we know that our guys have just been working on and off for all four years and its just been leading up to this whole moment,” North Caroline Defensive Tackle Bryan Mehaffey said.

This North Caroline team has never played Elkton but they are aware of the defensive threat the Golden Elks bring to the field.

” They’re a solid team all around,” Byrd said. “I give them all the respect in the world but come Friday night, it’s time to play football.”

In the first round of playoffs, Elkton knocked off Kent Island by holding them to 0 points. Golden Elks sophomore running back Raiquon Esteps finished that game with 265 yards, 24 carries and two touchdowns.

While Esteps is undoubtedly the Elkton star, the Bulldogs have a backfield committee with David Bailey, Kenny Jackson, Rodney Thomas and Connor McCormick.

Bulldogs sophomore running back who is no stranger to the end zone, David Bailey, attributes his success this season to his offensive line.

North Caroline has already adopted a winning mindset, ‘Nothing that we did before this game matters.’

“We haven’t had the best of history but we are looking forward to writing our own history and making something out of it,” North Caroline Running Back Connor McCormick said.

Every player and coach on the Bulldogs field will quote to you their mantra on the field; “Do what we do.” That saying in embedded in their minds and is the first things they will tell you about their team.

“We’re gonna do what we do,” North Caroline Head COach James McCormick said. We run the wing t [offense], we play a certain defense. We’ve been doing it for 21 years. We don’t change a lot from week to week. We are going to lineup and do our thing.”

Coach McCormick is hoping that they’ll “do what they do,” and do it better than Elkton.

Senior running back Connor McCormick happens to be the son of Head Coach James McCormick. A W in the win column will not only advance them to the state finals, but will be a great way to cap off Connor’s last  year playing under his dad. 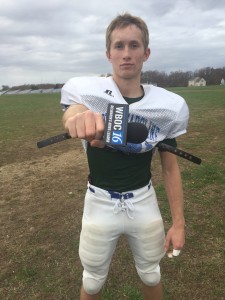 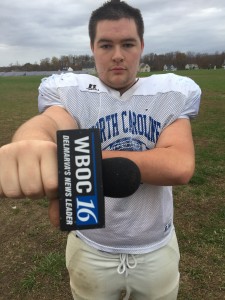