How Secure is John Harbaugh’s Job?

A 1-6 start to a season will cause both an increase of the internal and external pressure for any NFL head coach. When a 1-6 start is tagged with being the worst start in franchise history combined with preseason expectations that bordered on “Super Bowl or bust,” questions about Ravens head coach John Harbaugh’s ability to maintain the franchise’s level of success are beginning to percolate.

We are nowhere near creating a countdown clock for Harbaugh Watch 2015 or roll the satellite trucks out to Owings Mills, Md. However, a peruse of Ravens chat rooms indicate that there is a modest growth in the level of frustration with the coach.

Despite the six losses midway through his eighth season in Baltimore, Harbaugh’s overall regular season record is still an impressive 73-46. The Ravens are only three years removed from a Super Bowl championship. Harbaugh is one of only four head coaches to deliver an NFL title to Baltimore, joining Weeb Ewbank, Don Mcafferty, and Brian Billick in that exclusive club. 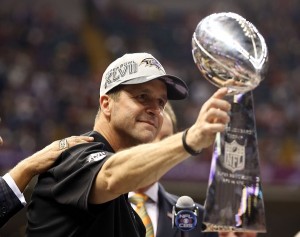 Whether by the club’s choice or his, could 2015 be the last season for Harbaugh on the Ravens’ sideline? Earlier this month, Baltimore felt the need to address rumors that he was being considered for the Southern Cal position. Nationally syndicated sports radio host Dan Patrick said on his show that Harbaugh is “high on USC’s short list.” Harbaugh denied any interest in that job saying, “This is what I’m doing. I love the Ravens, love being here, and it’s not a consideration.”

Hot seat is a term assigned to a coach whose job is in jeopardy. There is even a website coacheshotseat.com dedicated to ranking NFL coaches’ security. No surprise that New England’s Bill Belichek is considered the coach least likely to be fired. Prior to the Monday night loss, Harbaugh ranked 14th on the list. The seat maybe getting a tad toasty but it is not a raging inferno.

Barring a large win streak over their final nine games, the Ravens will not make the playoffs. The only other time Harbaugh missed the postseason was 2013, the year immediately following the Super Bowl title. It was also the first year linebacker Ray Lewis was not on the team. He announced his retirement prior to Baltimore’s 2012 playoff run. Lewis was one of eight starters not on the team’s roster in 2013. It was the most for any defending Super Bowl champ as the Ravens lost their final two games of the season to finish at 8-8.

This will likely be the worst season since the team found a home on the Inner Harbor in 1996. The positive out of this will be a high pick in the 2016 NFL draft. Baltimore has not had a first-round selection in the top 10 since selecting Terrell Suggs tenth overall in 2003. It has been 15 years without picking in the top five. In 2000, the Ravens selected running back Jamal Lewis with the fifth selection in that year’s draft. The opportunity to obtain quality talent is something Harbaugh can utilize in making a rebuild into a reload.