The holiday season is normally a special and exciting time of the year.  For the Cape Henlopen boys basketball team this past week produced an overtime win over Milford and a one point win over Sussex Tech.  Next week, they will host some of top high school basketball talent in the nation as Slam Dunk to the Beach tips off on Dec. 27.

Recently I had chance to talk with Viking Head Coach Stephen Re to discuss Slam Dunk, his team, and his background.

Pencek: As part of Slam Dunk to the Beach, Cape is scheduled to play Bishop McNamara (MD).  The Mustangs have one of the top junior guards in the nation, Jamir Moultrie.  What are your thoughts playing against that type of talent?

Re: I think playing those types of teams will do nothing but help make us better for the remainder of the season and help us achieve our goals.  Maybe my players don’t like it, but I do attempt to have those challenging non-conference games on the schedule.

Pencek: What does it mean for the school to once again play host to this event?

Re: It’s great being able to see people be excited about watching what could be the next LeBron James or the next Blake Griffin.  I remember last year so many people attempting to get autographs from some of these players. 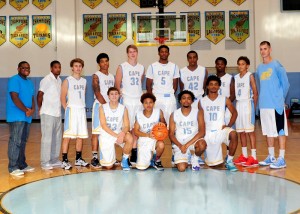 Pencek:  Can you provide us a insight to your background?

Re: I’ve coached at Cape the last five years.  Growing up, I moved all over the place particularly in the midwest.  My formative years were spent in Wisconsin.  My last two years of high school, my family moved to Maryland.  I played college basketball at Frostburg State.  I started coaching at Salisbury University as a graduate assistant.  Prior to Cape, I coached at Mardela.

My wife played at Salisbury University.  It’s a basketball family.  She had more success on the court than I did.

Pencek: Do you get any feedback from her after a game?

Re: I get it all the time.  She is good at reminding me about the emotions involved in the game because sometimes I lose sight of that.  Particularly last week the team gave it all they had to win in overtime against Milford and than turn around less than 48 hours later and win a one point game against Sussex Tech.  She keeps me grounded with perspective.

Pencek: What excites you about coaching?

Re: Watching guys have a light bulb go on.  Taking a player from square one to square four throughout the course of the years and watching him mature and watching them grow.  Getting them to a place where they can handle athletic adversity and being able to play at high level with a high IQ.  Seeing them learn to play outside themselves and for the team.  Too many times it becomes an individualized sport because of the attention somebody gets for putting the ball into the basket.  In reality, it’s such a true team sport.

Being at Cape has been terrific because the community has been awesome rallying around the guys.  It’s great support and it’s a really great place to be.

Pencek: What is you greatest memory coaching at Cape Henlopen?

Re: When we went to the Final Four two years ago.  We had internal conflict.  I had to make a tough decision.  We ended playing a second round playoff game without our leading scorer.  The guys rallied around and we ended up pulling out a win.  As things worked out, the player we played without later when he returned ended up having one the great nights in his career when we played in the semi-finals in the Carpenter Center.

Pencek: Outside of basketball what are some of your interests or is there something that not too many people know about you that you would like to share?

Re: I spend a lot of time with my children.  Living here, I’ve discovered going to the beach is a pretty cool thing.  My wife and I like to go for rides on bike trails.  I try to play golf when I can.