LANDOVER, Md. (AP)- As Kirk Cousins ran toward the home locker room, he pointed toward a local TV reporter and screamed: “You like that?! You like that?!”

He certainly had plenty to be excited about.

After a week of chatter about whether he would remain the starting quarterback for the Washington Redskins – and about whether coach Jay Gruden was more forgiving about errors by this QB than those by Robert Griffin III – and then a half of mediocre play and plenty of boos from the home fans Sunday, Cousins played brilliantly for two quarters.

His third touchdown pass of the second half, a 6-yarder to tight end Jordan Reed with 24 seconds left, completed the largest comeback in Redskins history, erasing a 24-point deficit for a 31-30 victory over the Tampa Bay Buccaneers. 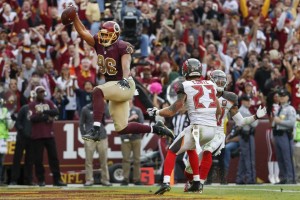 Asked about all the jeers from spectators, Cousins said: “You certainly don’t want to hear ’em. They paid for their ticket; they can do what they want. But I heard cheers at the end, and that’s all that matters.”

He finished 33 for 40 for 317 yards, the trio of scores and zero interceptions. He also ran for an 8-yard touchdown in the second quarter for the first points for the Redskins (3-4), making it 24-7 after two quarters.

“It was a good lesson: Just keep playing and you never know what can happen,” Cousins said.

“All losses really hurt, but you have some that really leave a deep scar,” Tampa Bay coach Lovie Smith said. “And this is definitely one of those. Definitely. It was too drastically different halves that we played.”

Here is what else to know about Sunday’s game:

QUITE A DRIVE: Trailing 30-24 with less than 2 1/2 minutes left, Washington got the ball on its own 20. “I’m pretty sure there are fans, or people all over the world that are Redskins fans, that probably were thinking, like, ‘Here we go again. Something bad’s going to happen,'” Redskins defensive tackle Terrance “Pot Roast” Knighton said. “But everyone on the sideline had the confidence that we were going to score and win the game.” Sure enough, Cousins went 9 for 11 for 75 yards en route to the go-ahead score.

‘FIGHTING CHANCE’: Bucs RB Doug Martin gained 136 yards on 19 carries, but it was 5 yards he didn’t get that might have swung the outcome. With 4 minutes remaining, Martin broke off a 49-yard run up the right sideline and appeared set to score, until cornerback Bashaud Breeland tracked him down, catching up to make the tackle at the 5. Breeland strained his right hamstring on the play and left the game. “They score there,” Gruden said, “the game’s over.” Instead of a TD that could have made it 34-24, Tampa Bay wound up settling for Connor Barth’s third field goal of the game and a six-point lead that Cousins erased.

ONSIDE KICK: The Redskins had been outscored 46-3 in third quarters this season until Sunday, when Cousins tossed a pair of 3-yard TDs about 4 1/2 minutes apart. The key? Rookie kicker Dustin Hopkins’ successful onside kick.

PENALTIES: The Bucs had seven penalties in the third quarter alone and wound up with 16 for 142 yards in all. Washington’s totals? Four flags for 20 yards. “I thought we’d gone past that,” Smith said. “But we haven’t.”