In November, Shockley was invited to participate in the 2016 Blue-Grey Football All-American Game and with the support of friends and family, he is able to attend.

Shockley plays middle linebacker and defensive end for his high school team but has aspirations much higher than high school ball. In the past few months alone, he has visited North Carolina A & T, Seton Hill University, Bowie State University and University of Mount Union.

The 2016 Blue-Grey Football All-American Game will be played in Tampa, Florida at the Tampa Buccaneers Stadium on January 9, 2016. Shockley says it feels good to be picked to play especially since to his knowledge, the last player picked from this area was his cousin Ben Tate. Tate later went on to play professionally.

“I’m trying to enjoy the experience of it and being around athletes like me,” Shockley said. “Hopefully it will speed up my recruiting process.”

During the game, Shockley will be playing along side future college and NFL players from all across the country.

Due to the late arrival of the letter, the Shockley family had a limited time to raise funds.

The cost of the experience rang in at $3,000 including the player’s All-American Xenith Helmet, hotel accommodations, Championship or Runner-up “super bowl sized” rings, game day tickets, and his share of the NFL stadium costs and transportation.

In just a month, the family was able to surpass their goal, raising $3,770.

“I’m grateful to have the support that I’ve had and glad the community thinks highly of me,” Shockley said.

Shockley has been playing the game since he was 5-years-old and his parents say he has been dreaming of playing at the next level ever since then. Shockley is also a Minds in Motion student and participates in outdoor track and field in the off-season. 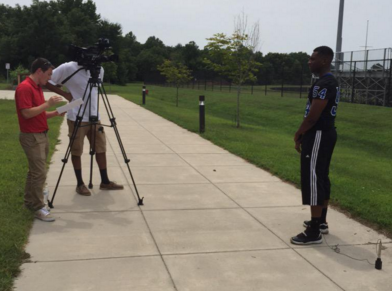