A video will be a factor as the Pocomoke Field Hockey team continues their drive for a 19th state championship.

Last week, to honor the one-year anniversary of the late Susan Pusey’s final game as coach, the Warriors and friends of the program watched the 2-1 overtime loss to Fallston in the 2014 Maryland semifinals. This session was not to identify opportunities to improve the team’s play or tweak strategy. It was for the message delivered by the Pocomoke head coach.

“After the match, Susan set a goal for the girls to return to states and win states,” Pocomoke Principal Annette Wallace said. “Hearing her talk about it, the girls used that. They have kept Coach Pusey’s goal in the forefront to get back to states and to go further.”

Watching that video was an emotional experience for Pusey’s successor Brandi Castaneda.

“It tugged on every heartstring I own,” Castaneda said.   “A lot of this has been out of my own comfort zone, but it is also the determination to carry someone else’s ambition through.”

After the Fallston loss, Pusey expressed to Castaneda her confidence for the 2015 team.

“She specifically said to me that 2015 is our year, we are finally going to go,” Castaneda said.

To this point, Pusey’s proclamation is on course for the ultimate goal. Pocomoke’s win over Queen Anne’s in the 1A East Regional was the Warrior’s 14th of the season, the most since 2011.

Pocomoke is back in the semifinal round. They will face Manchester Valley on Wednesday, Nov. 11 at neutral site Burtonsville. For a team whose motto has been “Pusey Strong,” Pocomoke has been finishing strong. Winners of their last 11 matches, the Warriors have three shutouts in their past four including the 7-0 contest against Queen Anne’s. While Pusey’s presence has been with the team all season, Castaneda had the added challenge of other Bayside Conference schools wishing to pay tribute to the legendary coach when they played Pocomoke.

The request was made to those programs to not hold their Pusey ceremonies before the matches, but instead wait until the contests were completed.

“It has been very tough for this team to shoulder with other teams choosing their own way to honor Susan,” Castaneda said. “Kudos to our girls for stepping into an adult frame of mind and handling the emotions.”

It would be difficult to question that Pusey built the foundation for the successful 2015 season.   Wallace believes Castaneda’s work has also been a big reason why Pocomoke is flirting with another title.

“I think sometimes we focus on how much we miss Susan that I don’t give Brandi enough credit for what she has done,” Wallace said. “Susan would be proud because Brandi has improved the team’s skills. I am seeing the girls do things now that they were not doing at the beginning of the season.”

Castaneda has a slightly different take.

“This is 100 percent Pusey fueled,” she said. “It’s the heart she instilled in all of us that’s never laid to rest regardless of the situation.”

As a player at Pocomoke, Castaneda was part of a program that won four consecutive state championships.   As a coach, she has taken on the role of sensei. The players she coaches regularly ask Castaneda about winning those titles.

“As much as it is to share my own experiences, I hunger for them to have that for themselves,” she said.

Another trip to the semifinals, with Pocomoke seeking a different result from last season. Win, and it is on to the championship match.   Win, and validate Susan Pusey’s prediction on that Nov. 3, 2014 evening in Annapolis.

“It gives us a hunger because it has been awhile since a banner has hung at Pocomoke High School,” Castaneda said. “The hunger and the drive is to bring it back.” 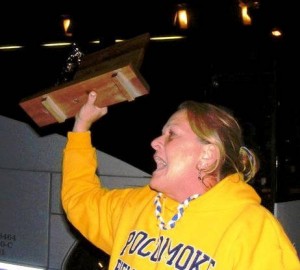 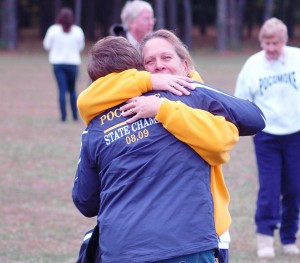 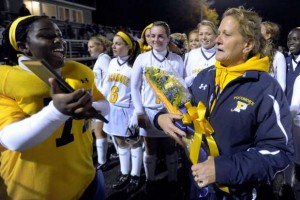 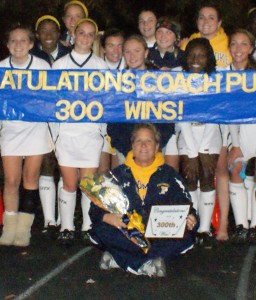