BRIDGEVILLE, Del.- Most Olympic athletes begin training at a young age. Morgan Phillips, who has her eyes set on the 2020 Olympics for rifling, is no exception. 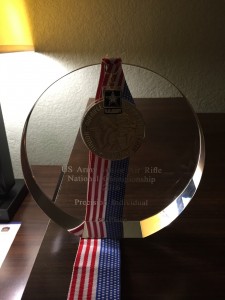 While she has many medals and accolades under her belt, she wasn’t always a fan of the sport.

Phillips started shooting with her dad Michael Phillips, the Fruitland chief of police, when she was 9- years-old. For her, it was about bonding with her father.

“I would say the love for it probably started two or three years ago,” Morgan said. “I didn’t like it too much at first. When I started shooting better and started winning some matches, that’s when I started loving it.” 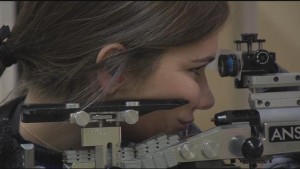 Once her father/coach realized her talent and passion for the sport, it was time to get Morgan exposure.

“I think that probably the first time she beat me, I realized that she was headed in the right direction,” Michael Phillips said.

The father-daughter duo travel all over the States for the love of the sport. They make most of their trips by car. Morgan shot in a match in Indiana, a 19-hour drive, Fort Benning, Ga., 15 hours, and West Point, N.Y.

“Junior year we were pretty much going to two matches every weekend,” Morgan said. “I mean we were all over the place its a lot of traveling.”

Morgan started shooting at open USA shooting matches with the goal of attracting college scouts. Her performance in the opens lead her to joining the United States Nation Junior team.

Phillips even traveled to Azerbaijan to shoot in a World Cup.

“The nervousness leading into something like that and to see her this summer progress to the point of going into a foreign country, shooting around the world’s best and actually shooting her personal best in that atmosphere was extremely impressive,” Michael Phillips said. 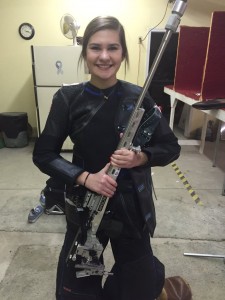 Her goal is clear: be an Olympian.

Morgan will graduate from the Salisbury School in 2016, an Olympic year, and will go to West Virginia with a partial scholarship. Once she graduates in 2020 her eyes are on the Olympics in Tokyo.