Score another in-state recruit for Dave Brock and the University of Delaware coaching staff.  On Wednesday, 1st Team All-State quarterback Nolan Henderson announced on Twitter that he plans to continue his football career as a Blue Hen. 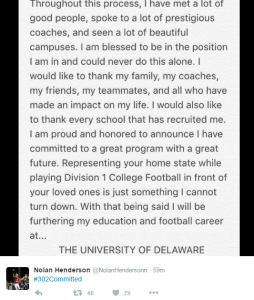 Henderson still has some work to do at the high school level.  The senior is part of a Smyrna team that will look to defend its 2015 Division I State Championship.

A Henderson signing will be the latest of award winning talent that has either committed to Delaware out of high school or have found their way back to their home state since Brock became head coach.  The 2011 State Player of the Year, Jamie Jarmon enrolled at Delaware after a three year stint in the Texas Rangers farm system.  Jarmon lead Indian River to the 2011 Division II State Championship.

In his junior season at Smyrna, Henderson passed for 3,297 yards and 36 touchdowns.