Stopping The Run Is Key For Terps At Wisconsin

COLLEGE PARK, Md. (AP) – Even if Wisconsin didn’t have standout Corey Clement healthy again, Maryland’s top priority Saturday would be to stop the run.
A year ago, the Badgers amassed 311 yards rushing against the Terrapins in a 52-7 rout. Melvin Gordon was responsible for most of the damage, and even though he’s now with the San Diego Chargers, Wisconsin still boasts a formidable running game.

After being sidelined for two months with a groin injury, Clement returned last week to run for 115 yards and three scores in a 48-10 win over Rutgers. The 5-foot-11, 219-pound junior is the focal point of a rushing attack that is among the best in the Big Ten.

Clearly, the Terrapins (2-6, 0-4) must bottle up Clement to have a shot at snapping a five-game skid.

“As far as stopping the run, that’s always how we start our defensive game plan,” interim coach Mike Locksley said Tuesday. “The last couple of weeks, I feel like defensively we’ve done some things where we’ve been able to contain the run and force teams to play left-handed, to where they have to throw the football. We attack the line of scrimmage and outnumber them in the box. We’ll have to continue to do that.”

Two weeks ago, the Terrapins limited Penn State to 48 yards rushing on 31 carries. Last weekend, Iowa mustered only 110 yards on the ground, averaging a mere 2.5 yards per attempt.

But neither of those teams had Clement, who ran for 949 yards last year as Gordon’s backup and is averaging seven yards per carry over his three-year college career.

“With a healthy Corey Clement, it’s going to be real important for us to be gap sound, doing a great job of team defense,” Locksley said. “He’s has the ability to make guys miss in the open field but yet also has the power to run through tackles.”

Stopping Clement is up to the defense, but Maryland’s offense can lend a hand by keeping the ball away from Wisconsin (7-2, 4-1). That means establishing a running game of its own and, more importantly, cutting down on turnovers.

Maryland quarterbacks have thrown 23 interceptions in eight games and the Terps have lost five fumbles.

“It kills the momentum,” tight end Avery Edwards said of the miscues. “We’ve got to help our defense out, give them more confidence in us.”

Since Locksley took over for a fired Randy Edsall, the Terrapins have committed nine turnovers in two games. Perry Hills has been the main culprit, throwing six interceptions and losing two fumbles during that span. 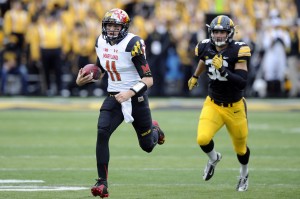 “Obviously, it’s deflating,” Locksley said. “It’s like raising kids – they keep making the same dumb mistakes over and over. You love them through it, you hold them accountable for it. Obviously if they continue to make (mistakes), then you have to make a change.

“It’s mind-boggling some of the egregious errors that we’ve had in terms of interceptions and fumbles and penalties. That’s what bad teams do. We’ve got a good team. We just don’t play real smart at times.”