DOVER, Del.- Another University of Maryland Eastern Shore Basketball season is upon us.

The men are coming off a winning 18-15 season and hope a tough opening schedule will not derail their hopes to start a strong 2015-16 campaign.

On Nov. 13th, the Hawks will hit the road to face the Kansas State Wildcats. They have two more road games following (Missouri and Wofford) before their home opener against Fairfield.

Elliott averaged 7.1 points per game and is predicated to continually be the Hawks’ top rebounder.

With the exodus of All-American Mike Myers, Elliott will have an increased leadership role on the team. 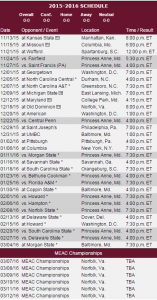 The Lady Hawks are coming off a loosing 14-17 season and are hoping to rebound in 2015-16. UMES Head Coach Fred Batchelor returns 10 players.

They will open their first game at home against the Georgetown Hoyas. They Lady Hawks are 0-3 against the Hoyas in recent games.

To give UMES a spark entering the regular season, they have a pre-season  93-37 blow out victory over the Wesley Wolverwines. The Lady Hawks are hoping that same momentum will follow them throughout the season. 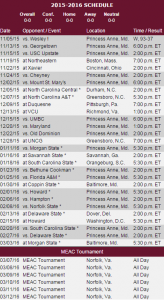