Now that Derrick Henry has won the 2015 Heisman Trophy, I am free to reveal my vote of the award.

It was tempting to go against the grain, to make a selection that was not safe and not expected. However like great attorneys, the three finalist in New York on Saturday made strong closing arguments.  For me, Derrick Henry, Christian McCaffrey, and Deshaun Watson were the three best players in the nation.  Here are the rankings I assigned to each on the ballot submitted Monday, Dec. 7:

I had Henry a distance third for most of November.  For me, the variety of skills the other two players featured gave them the edge.  Henry earned my top spot for his performance over the last two games.  The Crimson Tide running back accrued 460 yards and two touchdowns in wins over Auburn and Florida.  Henry had his best games in his team’s biggest games this year.  On the season, he nearly ran for 2,000 yards (1,986).  Rare is the Heisman finalist to gain that amount of real estate and not take home the trophy.

As each week passed during the season, McCaffrey never moved from the second spot on my list.  When you break a record previously held by former Heisman winner Barry Sanders, you have to be a strong candidate.  McCaffrey’s 3,496 combined rushing, receiving, and return yards is the new standard in the NCAA.  He was second only to Henry in rushing (1,847 yards).  What kept McCaffrey in my final three were the additional yards including 1,042 on kickoff returns.  Few in the history of college football impacted a game from so many different ways. 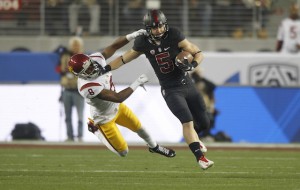 Until Henry’s late surge and McCaffrey’s record, I had Watson in the top spot.  It was a simple formula.  Watson was the quarterback, the leader of the number one team in the polls.  He did it with the arm, throwing 3,512 yards and 30 touchdowns.  He did it with the legs, rushing for 887 yards and 11 touchdowns.  My basic math tells me that Watson accounted for 41 Tiger trips to the endzone.  He really did nothing to warrant a drop from one to three.  Unfortunately for Watson, the production of his Heisman rivals was too great for me not elevate them on my final vote.

Outside Looking In: I am advocate for defensive players.  They effect the outcome of games just as much as their offensive counterparts.  If this vote occurred on Nov. 7 instead of Dec. 7, Penn State’s Carl Nassib would have been in my top three.  He was the most single disruptive force this season.  Nassib led the nation with 15.5 sacks.  What kept Nassib of my ballot was that closing argument theory.  The defensive lineman was injured in the Nittany Lions 10th game of the season and played only a handful of plays in Penn State’s final two.  All three games were losses.  For Nassib to earn a place on my ballot, he needed to have a big game in a big win.

I also gave consideration to Washington State’s Luke Falk.  The quarterback was fourth in the nation with 4,266 passing yards.  His 36 touchdown passes were a nice resume’ enhancer.  However, the Cougars finished 8-4 and are currently not ranked in the Associated Press Poll.  Again, closing argument was a large factor.