2017-18 has been a great high school basketball season for WI-HI. The next three weeks will determine if it is a championship season. With a 23-0 record, the Indians earned the overall number one seed in the 2A East Region of the Maryland State Tournament.

Win number 23 came Tuesday night at the Civic Center in a dominating performance. The Indians routed Easton 75-26 to win the Bayside Conference Championship.

WI-HI’s road to College Park begins Monday at home with the winner of the February 23rd First Round game between Kent Island and Parkside. 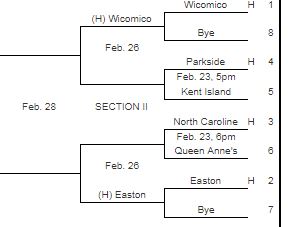 Defending 3A East champion Stephen Decatur is the number one seed in their section of this year’s bracket. 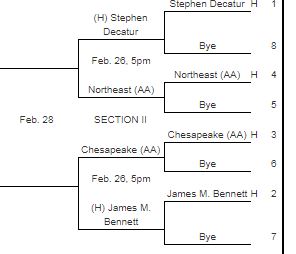 Another defending East Region Champion has a top seed in 2018, Kent County will host Perryville in the first round. Crisfield earned the number one seed in other section of the East Region. 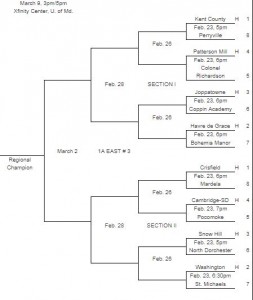 Before Tuesday night’s win in the girl’s Bayside Championship Game, James M. Bennett learned they were the number one seed in their section of the 3A East Bracket

The Clippers defeated Queen Anne’s in taking the Bayside title. The Lions have a number one seed in 2A

In 1A East, Mardela owns the top seed in their section of the bracket. The girl’s final four will be held at Towson University.