CAMBRIDGE, Md. – This past weekend the 2018 Bayside Conference Wrestling Tournament was held at Cambridge-South Dorchester High School. Fifteen teams attend this tournament at the end of every season, all with wrestlers hoping to advance to the following two weekends for the regional and state tournaments.

In these postseason tournaments, each wrestler earns his way to the state tournament, as well as points for his team with each win. In this year’s conference tournament North Caroline High edged out Stephen Decatur High by just two points, with the final score 208-206. James M. Bennett High came in third with 163.5 points and Kent Island High in fourth with 161 points. Click to see the rest of the list. 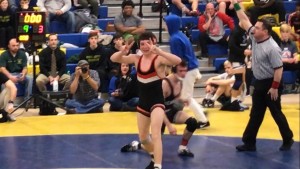 In the 120 lb. weight class final Ryan Bauer (ranked #5 in the state 1A/2A) from North Caroline adds to the team score with a win by minor decision over Stephen Decatur’s Cade Solito.

At the 126 lb. weight class the crowd got to see its first finals match pin of the night from Eric Smith of Queen Anne’s over Jeremy Danner from Stephen Decatur.

The 132 lb. final consisted of returning Bayside champion Decklan Fischer (ranked #1 in the state 1A/2A) of Snow Hill pulling out a major decision over Colin Jens from Queen Anne’s.

The 138 lb. final gave North Dorchester their only champion of the weekend, Jalen Teagle with a minor decision over Colonel Richardson’s Ryan Stanton.

The crowd got to see another finals match pin at the 145 lb. weight class from Kent Island’s Dylan Finlay (ranked #3 in the state 1A/2A) with the pin fall over Cullen Cannon of Cambridge-SD.

One of the closest finals matches of the weekend came at the 152 lb. weight class between Kent Island’s Nick Leisenring and Mizell Cooper from North Dorchester. Leisenring pulled out the win in the third period of the match to win by a minor decision of 6-5.

Kyle Bunce of Kent Island pulled out a 3-0 minor decision over Gabe Dennis of Snow Hill in the 182 lb. finals. 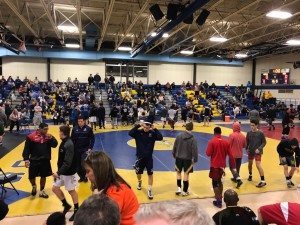 The championship wrestlers line up across from one another before their finals matches.

Another Snow Hill Eagle, Jordan Bishop made it to the 190 lb. weight class final earning a win by minor decision over North Caroline’s Alex Grable.

The champion of the 285 lb. weight class also won by pin falls all the way through the tournament. Parkside’s Jose Vasquez (ranked #2 in the state 1A/2A*) won the finals match by pin fall over James M. Bennett’s Angel Trujillo.

The Bayside wrestlers who have either earned enough seed points or placed top four at this past weekends tournament will be moving on to the MPSSAA  East Regional Tournament.

Come out and support your local athletes as they attempt to move on to the final tournament of the year, the MPSSAA State Wrestling Tournament, held the following weekend at the Showplace Arena in Upper Marlboro, Md.

* All state rankings come from here.