SALISBURY, Md.- Bicyclists are getting ready for the 27th annual Sea Gull Century put on by the Salisbury University Foundation.

The 100 miles race will take place on Oct. 3, 2015. There are three different courses, which all have the same start and finish location.

Registration opens up every year in May. Registration is still open with a small hike in fee, $90.00. Each registrant will receive a long-sleeve t-shirt and can enjoy a reception on the Friday before the event from 4-7 p.m.

Riders can donate to Habitat of Humanity upon registration. In previous years, over $120,000 has been raised by donations to build houses in Wicomico County.

Proceeds will also benefit the Salisbury University scholarship and grant fund among other charitable organizations.

“We have really cool rests stops along each route,” Waters said. “Riders can get medical attention and hydration. We have bike shops and players can listen to live local bands.” 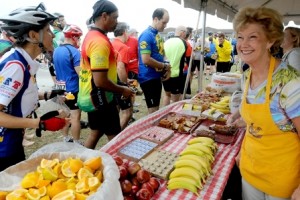 Salisbury University students created a smart-phone application for participants in the race. The app will show the location of rides, their speed and the locations of the rest stops.

Waters said the some experienced riders finish around 12:30 p.m. and a heavy flow of bicyclists come in around 4 p.m. The race provides sweep vans at 6 p.m. for those who cannot finish or need help.

Riders are tanking to twitter to express their excitement for the 2015 festivities:

Just a few weeks until the Seagull Century! #goteam http://t.co/puxVardYaV