Just like 2014, there is a path to a Terrapin victory over Penn State. Both teams are coming off a road loss at Ohio State. Maryland went down in Columbus 49-28 on Oct. 10 while Penn State is smarting from their first Big Ten defeat 38-10 on Oct. 17.

Maryland utilized its bye week to make a coaching change by replacing Randy Edsall with interim head coach Mike Locksley.   For Maryland to achieve a first time win streak in this series and give Locksley his first win since leading New Mexico to a 34-31 victory over Wyoming on Nov. 6, 2010, here is the WBOC Blueprint To Victory:

The Nittany Lions have the second worst offense in the conference. Junior quarterback Christian Hackenberg is nowhere close to performing like freshman Christian Hackenberg. This season he is completing 53.1 percent of his passes as Penn State is averaging 23 points a game. Only Minnesota and Northwestern have scored less in the Big Ten. While the Lions may struggle to generate points, they can put stress on a defense. Freshman running back Saquon Barkley is averaging 8.3 yards per carry.   Chris Godwin is the fifth leading receiver in the Big Ten and Hackenberg’s favorite deep ball target. There will likely be a few big gains both on the ground and through the air, just make sure they occur outside the redzone.

Everyone else does, why not the Terps? OK, that may be a bit too general as Penn State did not allow a sack against the likes of Buffalo and Rutgers, but the point stands. Christian Hackenberg goes down and goes down often, 24 times in 7 games.   Part of it is the sub par play by the offensive line. Also at fault is the Nittany Lion quarterback himself. Hackenberg can hold onto the ball too long and as result he takes an unnecessary sack, see last week’s Ohio State game for some examples.   Fortunately for the Terrapins, they have two of the conference’s top ten sackers. Yannick Ngakoue’s 7 sacks are the sixth best total in the nation.   His partner on the defensive line, Quinton Jefferson has brought the quarterback down 4.5 times. Both should set-up several appointments on their calendars to meet in the Lions’ backfield in Baltimore. 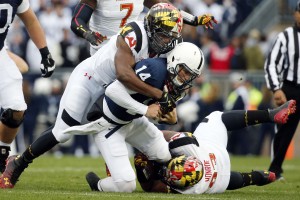 When last we saw Maryland Quarterback Perry Hills, he was rushing for 170 yards (the most ever by a Terrapin QB) at Ohio State. When last we saw the Penn State defense, it was being gashed on the ground by Ohio State signal caller J.T. Barrett for 106 yards and two touchdowns. As formidable as the Nittany Lions’ defense can be, it struggles with dual threat quarterbacks. Hills’ ability to make plays with his legs may buy him time to a make a few with his arm.

With only two wins in six games, break out the trick plays and by all means do not run a conservative plan.  If Maryland is to save the season, it has to start against Penn State. This is a winnable game. Maryland was tied at 21-21 midway through the third quarter against the #1 Buckeyes. They only trailed 6-0 at halftime against Michigan. By challenging the top teams in the nation, the Terrapins have the ability and the opportunity to finish against unranked Penn State.